County election board: Husted all alone 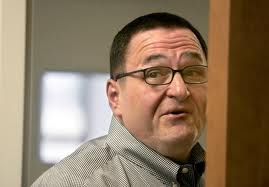 Surprise surprise.   The Summit County Board of Elections is sending three more deadlocked 2-2 votes to Secretary of State Jon Husted to cast the deciding vote.   This has occurred so often since County Republican Chairman Alex Arshinkoff was reinstated to his old seat that one wonders why  any board member bothers to vote at all. On most important issues, the board consists only of Husted.

In this instance,  the two Democratic board members want to provide more space at the empty hhGregg building near Chapel Hill Mall to serve a projected 25,000 early walk-in voters  for the presidential election.  Arshinkoff and his compatriot Ray Weber propose  the  vacant second floor at  the Beacon Journal, with less available parking. Make me laugh. Voters would have to pass the BJ's security guard at the entrance to the building and  sign something.  (The procedure hasn't been worked out, I'm told.)  Those who aren't able to walk up two floors would have to wait for the elevator from another era.

Convenient, huh?  But convenience is not what the GOP locals have in mind. Voter suppression is a better way of explaniing it.

The Republican duo refers to the higher cost of the Democrats' proposal, but that's clearly a ruse.  Across the Land of Freedom and Opportunity, the GOP has devised various plots  to  restrict voting by you-know-who's with Voter ID Laws, shifting precincts  and other nefarious means short of house arrests.  It's intended to, um, wipe out massive  fraud that doesn't exist.  It's no different in Democrat-rich  Summit County, where a Democrat denied is a Republican plus.  This theory began long ago  when it was not uncommon to hear Arshinkoff et al literally pray for bad weather on Election Day to discourage blacks and seniors.  It's still in play.

(When reading this Post, it would be more appropriate to turn off the sound of Sousa's Stars & Stripes Forever. We're not there yet, folks. )

Arshinkoff and Weber should be invited before County Council and the County Executive to explain why they as unelected bureaucrats should question the amount elected officials want to spend at the board. The micromanaging of the board by elected officials is a welcome change for a place that is generally without accountability.

There seems to be no limit to the cheap tricks the Republicans will pull to discourage certain voting blocs access to the polls in this election, locally and nationwide. In the name of non-existent voter fraud, several states controlled by the GOP have offered up a smorgasbord of ruses to keep the poor, black and brown minorities, and many younger voters from exercising their constitutional right to the ballot. In some states, new laws to curtail access have drawn legal challenges in state and federal courts. In Pennsylvania, for one, an estimated 700,000-plus voters could be denied easy access to voting booths, including many who've been voting freely for decades. And guess where most of those voters live? Would it surprise one to know that most come from Philadelphia and other urban concentrations where Democrats largely reside