Well, Kelly made good copy while it lasted 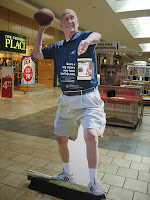 Why did I allow myself to be  so gulled by the gushing media reports  all week telling me that Oregon Ducks head coach  Chip Kelly would be on the Browns' payroll in the 2013 season?  I should have known better. This was  just another Browns' failed  gold rush that has encouraged so many previous coaches and quarterbacks to take a sabbatical on Lake Erie.

The Plain Dealer called this spectacle to my attention this morning with the headline on the sports page:

The reach for gridiron greatness  met the same fate  as John Boehner's Plan B.

If I may butt in, I would call attention to a large cutout of  former Notre Dame and Akron U.  coach Gerry Faust standing in Summit Mall.  It's  sponsored by the Crystal Clinic Orthopedic Center with Gerry's praise of how well the clinic treated his hip and knee problems.

If the new  Brownsmeisters can find a way to make it worthwhile, Gerry might be available now that he is free of bodily pain.

Better yet, he lives just down the road and there wouldn't be any moving expenses.

P.S. As I noted in the previous post, the Browns are always more interesting after the season than when the team is on the field.

That's funny; the word out here in Portland has it the other way around: that Kelly walked away from the Browns.

The headline in this morning's Oregonian reads "Kelly stiff-arms NFL again." There's a subhed, too: "Chip Kelly spurns the Browns and the Eagles, will return to sideline as Oregon's head coach."

The guy made $3.5 million this year and has four years left on a contract with a $3.5 million buyout. What could the Browns have offered?

With the Browns shopping for a coach, do you think that Jim Tressel down at the Univ. of Akron could be ;pulled away from his PR job?

Nope. The Browns couldn't afford him.