After Kasich, we can again eat in 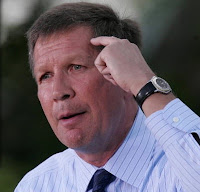 Ever  since John Kasich decided  that he'd rather be president than governor he's been delivering all of us decades into his past:  the blue-collar kid  from  Western Pennsylvania   whose father was a mailman;, the former chairman of the U.S. House Budget Committee who singlehandedly (the way it sounds in his current speeches) balanced the federal budget; the former member of the Armed Services Committee who opposed the B-52 bomber:   the can-do politician who insists that he is "surging"  in the presidential race even when he's not.  In his long history in Ohio he's assured us that he can accomplish everything short of sending the Cleveland Browns to the Super Bowl

And now, he's  stepped into it when  he told a group of women in Virginia that  he won a  state senate seat 37 years ago at  age 26 when,  bless 'em, women left the kitchen to work for his campaign.

Pure macho surfaced again.   As the National Memo put it, that recounted  story of his youthful political vigor  "showed how culturally dated he can still be." (Did women dutifully return to their kitchens  after he was elected that year?)

Throughout his political  life, Kasich has been a Zelig figure.  You know, the Woody Allen fictional character who could evolve quickly from one identity to another as the situation required. He once was branded as a snappish, tough-talking being who showed no mercy to his rivals.  That was the residue of his earliest political existence as an aide to  Ohio State Sen. Donald "Buz" Lukens, who could  always widen the the goal  posts  to please an audience.  Lukens once explained to me that he could speak on  liberal college campuses because "I know how to fuzz it up a little."

Alas.  Lukens, a handsome lady's magnet from southwest Ohio   whose  conservative  style points eventually tumbled down in disgrace with his involvement with a woman too young to be involved.

Once in office, Kasich set out to be the arch conservative, with jobs as a Fox News  commentator, a crack at being district manager for a Wall Street company that failed  and a developing Good Humor man, macho or not, as a contrasting candidate to Donald
Trump et al.

But as we see from  his kitchen comment, John Kasich hasn't changed from his days  in another era.  He just heartily signed an anti-abortion bill passed by the legislative hoofbeaters in Columbus that  defunds Planned parenthood.  The talk, all along, was that  PP was selling fetuses, as " exposed " by a discredited video that an official probe ended with indictments of the film's two producers;   for Kasich and his cheering section, there will continue to be references to the PP's  "scandal", ignoring  the probe as non-productive to their fictions.

That parallels the fiction of  John Kasich, if you want to take the time to review of how, for his sake, he briefly liberated  women from their rightful place over the kitchen stove.

The B 52 first came into service in the mid 1950's and continues to be a major system for the US Air Force. Kasich was barely in diapers when it became our main strategic bomber. The "imperial class" in Washington did in the late 1970's reject the XB-70. Maybe this is the correct reference.